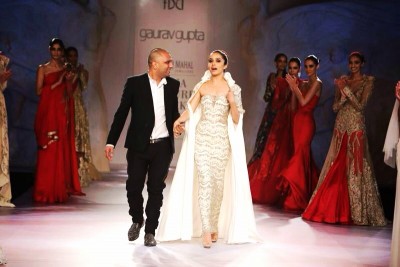 Gaurav Gupta admits that intelligent women keep his creativity alive as he completes seven years of wading through and discovering what he actually loves – asymmetry and making the nimble sari, well… uber sexy

He is seven years old in fashion, but the Central Saint Martins’ graduate hasn’t forgotten the lessons he was taught by his Iranian professor in fashion school, who besides being the coolest teacher honed a young Gaurav Gupta’s skills in pattern cutting telling him to tuck at the right places, hoping to give women a slimmer, taller look making him one of the few names who have adopted drapes and added a wow factor to it, albeit ingeniously.

Admitting to getting his most edgy ideas from life, people, and art, Gaurav who showcased at the India Couture Week 2014, says that everything in life is interconnected and you have to find those missing links which will complete the chain of thought, shaping it into concept-based clothing. “I must confess deadlines are important for designers like me as that’s the only way things will get done. The last minute rush makes you think faster, harder and all the cool stuff for me, actually happens when I am pushed against the wall,” he laughs.

With style, Gaurav hopes to contribute to beauty in life, even though he does believe that it is the most “vain” profession to be in, his effort remains to add confidence in women when they wear a GG. “Fashion is feminism; it is an expression and also has social/cultural influence as history will validate. But I am a victim of my own creations, now women come to me asking for sari gowns, they can’t get enough of it. So this has become my own, individual battle,” he smiles.

Calling fashion, a ‘process of love’, Gaurav may get at times intimidated by handling labour or balance sheets, but what keeps him going is the pursuit of new things. Also it is a toss-up between art and commerce, and finding the appropriate balance between the two. But he has learnt over a period of time, to listen to his clients, have a dialogue and not just wrestle with ideas blindly.

Not being disciplined or organised enough, is what Gaurav counts as one of his biggest weakness, but he does maintain an equilibrium with “living in a dream world” which keeps him motivated enough to showcase something fresh each season.

Marc Jacobs muse is Kate Moss; Audrey Hepburn was Hubert de Givenchy’s poster girl; Isabella Blow gave Alexander McQueen his much needed ‘spiritual’ anchor and Jean Paul Gaultier immortalised the conical bra with Madonna, for Gaurav, the cerebral Kalki Koechlin epitomises his brand’s spirit. “She is a thinking woman, an intellectual, who views fashion as a means of communication and not just to look pretty and for me that is the deal clincher. Positive, alive women interest me, who have a point of view and are unafraid to express it,” he adds. Interestingly, he counts the stunning Deepika Padukone, the eternally charming Sridevi, as well as French stunner and Bond girl Eva Green as his muses.

This year, GG has taken the royal route, as he unabashedly admits that he is over his mad love for neons now, so his spectrum has gravitated towards pure, elemental hues. “As I get more confident about myself, I know my areas of expertise; it is red carpet glamour, with a focus on fantastical elements which give it a pleasurable uncertainty which adds to its appeal,” he says. India Couture Week saw, taller, slimmer bodies, with a slender silhouette where the drama is restricted to flounce, but only at the bottom. “I’ve become methodical in my art at the same time more refined and also daring, it is a kind of a ripple effect. There will be, of course, zardosi and metallic embroideries which have always made me happy,” he concludes.